Known from time immemorial, onion is food and at the same time an excellent natural medicine.

It is not used culinary in large quantities, nor is it usually the main ingredient of the dishes in which it participates, but it is noted… as if it were one of those secondary actors with character that in the movies does not play the leading role but whose presence balances the whole.

The onion comes from Asia and was considered almost a talisman by the Egyptians, who attributed the relief of numerous diseases. It was also highly appreciated by Greeks and Romans.

The great doctor Hippocrates prescribed it as a diuretic, to heal wounds and treat pneumonia. Traditional Chinese medicine recommended it especially for respiratory diseases.

As food its use was widely extended during the Middle Ages. It is currently the third most harvested vegetable after tomato and potato, and is grown and used worldwide.

Onion (Allium cepa) belongs to the extensive family of liliaceae, as does garlic, with which it shares some properties.

As for its vitamins and minerals, try good doses of vitamin C (9 mg / 100 g), potassium (300 mg), calcium (32 mg) and phosphorus (44 mg), as well as a high percentage of the trace elements chromium and small amounts of sulfur, bromine, cobalt, copper, magnesium, silicon, and zinc.

The onion is also very rich in phytochemicals , among which the flavonoid quercitin stands out . This antioxidant, more powerful than vitamin E, has anti-inflammatory, antiallergic and protective properties against cancer, especially in the breast, colon and prostate; Additionally, it can help reduce symptoms of fatigue, anxiety and depression.

It also houses sulfur compounds with purifying effects and essential oil with bactericidal and fungicidal properties.

Its content in glucokinin, a substance considered “vegetable insulin”, is interesting , as it helps fight diabetes. 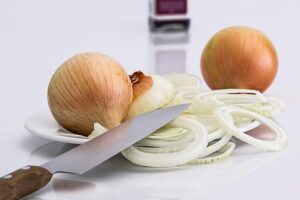 The fame of onion as a purifying food is well deserved, but its health properties go much further. 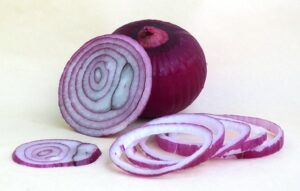 Onion in the kitchen

Onion is essential in the kitchen and is one of the most widely used condiments in Mediterranean gastronomic culture.

Thanks to its juiciness, this food allows cooking with very little oil and water. Pickled, fried, battered, boiled, baked, or raw, onion is delicious.

By cooking food in this way, the loss of nutrients is minimized and the dish is lightened, making it easier to digest.

A good base of chopped or julienned onion on a light base of oil, preferably olive, is always a good start to prepare any stew, stew or pie filling.

An important detail is to add the onion when the oil is hot enough, but before it starts to smoke. This prevents it from soaking up oil and breaking its structure.

Before adding any other ingredient, it is necessary, in most recipes, that the onion reaches a certain degree of cooking. Ideally, wait for the moment when it becomes transparent .

If not, some ingredients, such as tomato, stop the cooking process and prevent the onion from giving off all its flavor and cooking enough.

The onion makes the ingredients of the dish integrate with each other, harmonizing their flavors. Its juiciness is also useful in the preparation of fillings and baked recipes, since it prevents them from drying out and gives them unctuousness.

A simple onion roasted in the oven and well seasoned is one of the tastiest and easiest dishes to prepare.

When used raw, it is very refreshing and, of course, an ideal ingredient in salad dressing. With tomato, olives and a little olive oil it is excellent.

To soften it, just leave it for a few minutes in maceration, with a little salt and a splash of vinegar.

It can also be served simply with a little lemon and some chopped parsley, as is customary in some Arab countries.

This affinity with vinegar makes it an ideal vegetable for the preparation of pickles, either alone or mixed with other aromatic herbs.

When it comes to cooking, the onion combines well with most vegetables and cereals. It is a good base for paella, and should not be forgotten in the making of millet or couscous. It also makes good crumbs with garlic and leek.

At the time of purchase, specimens should be chosen that have a firm bulb, without buds and that keep the skin intact, which must be crisp.

To preserve them well it is not recommended to put them in the fridge. On the contrary, they should be stored in a dry and ventilated place, where they do not receive direct light, and place them without heaping.

You may have missed

What Is Ultherapy and Why Do People Get It Done?

Mushrooms To Your Skincare Routine?

How to Build a Skincare Routine with the Best Nivea Products

7 Accessories to Complete a Basic Outfit

Things You Should Know About Facial Cupping/Hijama